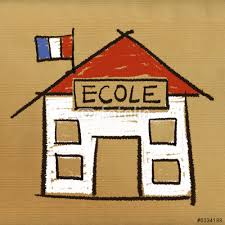 One thing that never fails to remind me that I live in a foreign country, is the sight of school children wearing their school uniform. I think the uniform is very emblematic of British education. I also often get caught in the rush for the school run when in town because schools finish earlier than in France. School days organisation are forever changing in France but I’m going to try to inform you of the latest trends on this subject.

In 2008, the school week was reduced to 4 days. French pupils then had the lowest number of school days in the OECD countries: 144 days out of 365, compared with 187 days average. This 4 days week meant that French students had some of the longest and densest days in the world. According to scientific research, this is not adequate and even impedes proper learning. A new reform for the school days would spread the number of hours worked during the week and would teach key lessons when children are most receptive.

So, in 2013, the Government adopted a new law increasing the school week to 4,5 days. The number of days at school is now 180 in a year. And it is already planned to adapt the number of hours worked to 24, spread out over 5 days. So, an increase of another half day every week. However, at the moment, it is still possible for a school to work with 4-day weeks if all in the teaching team and the town council agree it works better for their school.

As for the summer holiday, France has one of the longest holiday with a 9 weeks break. And other holidays are also the longest with 4 periods of two weeks, spread out over the 10 months school year. Winter and spring holidays are taken at different times across the country depending on where the school is. The country is divided in 3 “zones” and each one will take in turn to have their holiday so that holiday resorts don’t see an invasion of holiday makers on a short period of time. In 2015, there has been a change in the way the areas were divided. You will find a map and the dates for the years past and to come on the link below.

To sum up, in France students tend to study for a shorter time than in many European countries, but have a lot to learn during this time. It looks like most countries have a 5-day week and this is where the French schools are heading for too. Just like everywhere else, the Government is trying to encourage children to move and be more active, and lots of studies showed the beneficial impact that physical activity has on learning. I’ve seen a few interesting initiatives like a “pedibus” where children wait for their “bus” at designed stops. A “bus” being a group of children and some parents walking to school on a determined route.